Javelina Jundred is a 100 mile trail race (also a 100k option) put on by Aravaipa Running near Fountain Hills, Arizona. The race makes use of a 15.3 mile loop on the Pemberton Trail which is run ‘washing machine’ style reversing direction each lap. The loop has about a thousand feet of gain with the high point of the loop falling near the ‘Jackass Junction’ aid station around the midpoint of the loop.To make up for the distance, a mini 9.1 mile loop is added at the end to make the distance (100.9 mile advertised course length). It is also a bit of a themed race falling just after Halloween. In addition to the standard awards for winning the race, there are also awards for costumes and more. Many of the runners and spectators were in full-on costumes adding some flare and fun to the daunting task of running 100 miles in the desert.

While I hadn’t broadcasted it widely, my goal was to use Javelina to set a new PR at the 100 mile distance and finally go sub 24 hours. While there isn’t anything magical about it, there is something special to me about covering 100+ miles by foot in a single day. In addition, Javelina offers a special buckle for those finishers under 24 hours so my ‘A’ goal was set. My ‘B’ goal was a finish with a new PR (faster than 25:15) and my ‘C’ goal was a finish sub 30:00 (the course cutoff). I’ve raced a lot in 2014 – likely too much so I was also prepared to put it all out there knowing that I wouldn’t be pinning on any additional bibs until 2015.

While Kelly and the kids couldn’t make the trip, my great friend Betty jumped at the opportunity to crew and pace. She is a really strong runner, incredibly organized and has a very positive attitude – exactly what I would need! 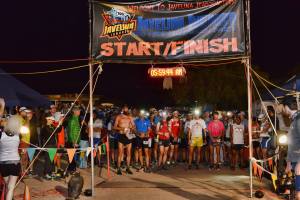 I was slightly worried about the race congestion with so many runners but it just wasn’t a problem. There were a couple moments in the first mile or two that you rubbed elbows with another runner like you might in an road race but it also probably helped to keep people to a more reasonable pace instead of starting out too quickly. The weather was still cool (low 60s) and I made great time running with Sarah (who had paced me at Mountain Lakes 100) and her friend Desiree. They’re both super strong runners and run hills/mountains far more than I can in the midwest. While our pace was measured, I noticed that these ladies excelled at running the uphills where I naturally broke into a hike. Keeping up with them on the first loop was a fun challenge! I finished the first loop feeling strong but noticed that the temperatures were already rising and I was getting hot.

I saw Betty after the first loop and quickly changed out water bottles, nutrition and put on my sun gear including a running hat with ‘desert’ flaps and cooling sleeves for my arms. She had things organized and had me in and out like a NASCAR pit crew. The 2nd loop was warm but I focussed on keeping my pace and body temperature in check. At each aid station, I dumped ice in my hat, inside my arm sleeves and anywhere else I could stuff it! 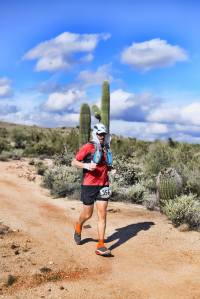 This was going to be the ‘hot’ loop. Betty had me in/out again and I once again saw my good friend Jason who was out pacing another runner at the race. They were both encouraging and didn’t let me hang around long enough to start worrying about the heat. The temperatures were nowhere nearly as bad as prior years where the thermostats topped 100 but it was hot and exposed and I was baking. I kept moving but took walk breaks where necessary to avoid over-heating. I did start to notice that I was losing my appetite in the heat but tried to take cooler nutrition from the aid stations including fruit and soda. In addition, my friend Chad (who I had run with at Black Canyon 100k) was on course on the 3rd loop with ice-cold popsicles. Chad was supposed to be running in the race but has had some injuries and couldn’t participate. The cold popsicle was the perfect combination of cold and calories and helped get me through the loop. Chad definitely has some very positive trail karma headed his way!

This was our first night loop. Betty got me setup with my headlamp and I added another layer to my pack in case I got cold. I had heard horror stories about people going from heat stroke to hypothermia in hours in the desert as the sun set and wanted to be ready with a layer just in case. The layer ended up staying in my pack for the balance of the race – I never needed it. I made it almost half-way through the loop before the sun fully set and turned on my headlamp. I caught up with Sarah and Desiree again during this loop and we shared some miles and stories about how our respective races had been going. My goal for this loop was to ‘run to Betty’ who would be transitioning from crew-chief to pacer. I was excited to be running with Betty and found some new energy on the 2nd half of the loop running back towards the start/finish area.

Betty was ready to run and we headed out. I was a bit over-cooked from the 100k I had run so far and likely not taking in enough calories so I focused on eating and moving. It was great having Betty there and telling her about the trails, aid stations and of course seeing all the crazy runners – many of whom had dawned full-on costumes as part of the halloween theme of the race. We hiked anything that resembled an uphill and ran the flats and downhills.

Betty and I were moving well and seemingly picking people off left and right. A lot of the runners had gone out fast and were fading. My initial nutrition plan including a mix of bars and blocks wasn’t really working. The thought of another bar or block brought instant visions of projectile vomiting on a cactus. I pretty much switched over to baked potatoes and coca-cola with a bit of soup and fruit. We were moving well on loop 6 and Betty and I started thinking a bit about the 24 hour goal. Could we make it? I was slowing down and my right leg was hurting badly but we were moving and might have enough time. We did some quick (and likely incorrect) trail math while running and agreed that we had a shot at making sub 24 but just needed to keep moving. We moved well on the sixth loop and ran it faster than the 5th – almost a minute per mile faster.

Runners get a special glow in the dark necklace after finishing loop 6 to indicate that they’re on the final loop. The special loop takes you back up the first 5.5 miles of the ‘normal’ loop in the clockwise direction which happens to be the most difficult/rocky section of the trail and then drops you back down on a shortcut to loop back. At this point, my right leg was hurting like hell to the point that each step caused pain but we were still moving with a reasonable pace. The run/hike on the 5.5 mile uphill went well though I think that I kicked half of the rocks on the trail. We finally saw the green light at the special cutoff and I got to experience my first piece of new trail having run the same 15.3 miles back and forth all day. The Tonto shortcut was a nice groomed downhill trail. At this point, we had nearly an 1:20 to cover 3.6 miles to finish off the race. I was hurting…injured and while I ran a bit, I told Betty that I wanted to walk more than run to avoid a race ending injury. I had my sub 24 within reach but needed to manage the race and my body to avoid doing something fatal! At around 23:40, the finish area was in sight and we ran it in! 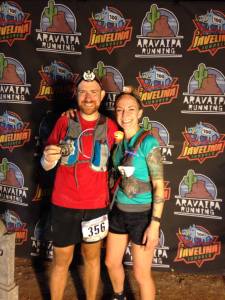 Both Betty and Jason were there to congratulate and celebrate with me at the finish. In addition, Ultrasportslive.tv had a live camera and Kelly and the kids got to see a live stream as I finished!

This was a great and well organized race. 100 miles is never easy but the race was far more difficult than I expected. Between the mental challenge of repeating the same trail over and over, the heat of the Arizona desert and several miles of semi-technical rocky trail – this wasn’t exactly the completely runnable race I had expected. The challenges I experienced made the new PR and sub24 time that much more special.

One interesting item from my garmin data is 22:51 of moving time compared to 23:44 of race time. This is likely one my most efficient races as far as minimizing stoppage time at aid stations. There is a certain amount of stoppage time that is expected to eat, fill water bottles and change gear. While I had a couple stops that were 5-10 minutes to fix my feet (blister protection), I think that I was nearly constantly moving.

Full details here for all the data geeks: http://connect.garmin.com/modern/activity/625589158

While I covered the 100+ miles, I wouldn’t have been able to do so without the constant support and encouragement from Kelly and the kids. Even though they weren’t there in person, the texts going back and forth between Kelly and Betty through the day gave me added motivation. Further, having a great friend and amazing runner like Betty there to crew me through the day and then run 40 miles through the night was terrific.

Special thanks to all the runners, pacers, race organizers, crew members and especially the volunteers. Supporting hundreds of runners for nearly 30 hours in the desert is a daunting task and everyone I encountered during the entire weekend was friendly and supportive.

And with that, my 2014 racing calendar is done! I’m going to take some time off from racing to let my body recover and strengthen before 2015. Don’t worry, I will still be running and exercising…just without the pressure / distance of a race.