It had been a while since I had visited the Pacific Northwest so running 100 miles near Portland seemed like great excuse to plan a visit. Mountain Lakes 100 Miler is put on by GoBeyond Racing was in its quasi-inaugural year. The race features about 12,000 ft of climbing and the equivalent amount of descent and is run almost entirely on trail including nearly 60 miles on the PCT.

What exactly is a quasi-inagural year? It turns out that the inaugural running of the race wasn’t looked on favorably by the weather gods and was cancelled mid-run before any runner could complete the distance. I figured that the race was due for some great weather and signed up for the 2014 running expecting favorable temperatures and sunshine – essentially the exact weather that you wouldn’t expect in the PNW.

Through a combination of good luck and karma, I was able to link up via facebook with a local runner who was willing to pace me for the last ~48ish miles of the run. Sarah had run the inaugural race and knew the course well. In addition, she seemed to know just about every other runner, volunteer, marshall and spectator so she made for the ultimate tour guide!

I flew out to Portland on the Thursday before the race to get settled, get some pre-race shopping done and get the travel out of the way. This turns out to be one of the best decisions I made as some deranged guy decided to set fire to the Chicago air traffic control facilities causing the cancellation/delay of more than half the flights in and out of Chicago that Friday.

On Friday, I drove out to the race which started and finished at the Olallie Lake Resort. The resort is ‘rustic’ meaning that the cabins don’t have electricity, running water, heat or plumbing but they were situated about 200ft from the start line so it was perfect. After packet pickup and a bit of chit-chat with other races, it was time for some sleep before the big day.

I’m going to break the race into four distinct segments. 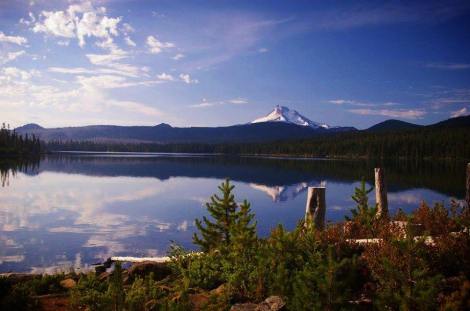 Starting from Olallie Lake Resort, I joined 80 other crazies and started running in the dark. The weather was perfect with a slightly damp/humid 50 degree starting temp and temperatures likely to hit the 60s during the day. Within approximately twenty minutes, the early morning light started to rise allowing greater visibility to rolling mountains, lakes and pacific forests. The first roughly half-marathon went through without issue including a nice downhill stretch that allowed for some free speed and great conversations with local runners. After about 14 miles, we switched over to a different section of trail which was night and day different from the initial miles. It was far more technical with tons of rocks and roots. The race had gone from extremely runnable to a bunch of hiking in minutes. As crazy as it sounds, this was probably my low-point of the entire race. As beautiful as the scenery was, I was suddenly moving very slowly when I wanted to run. I kept moving knowing that the lows would pass and eventually made it back to the start/finish area which completed the first 26 mile segment of the course. The first 26 miles took me approximately six hours – almost an hour slower than I had hoped to complete the initial marathon which only served to lower my spirits. As difficult as it is to pinpoint specific issues in a long distance race, I don’t think that this was related to nutrition but rather to the mental impact of logging some really slow miles with still-fresh legs. 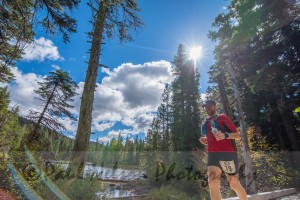 I was a bit down leaving the aid station having started much slower than I had expected. I passed a terrific volunteer who yelled “HERE COMES SOME AWESOME SINGLE TRACK” to which I replied “About time!”. He was absolutely right. This next section was roughly 50k of absolutely beautiful and runnable single track along the famed Pacific Crest Trail. While it had plenty of climbs, the terrain was far less technical and I was able to open up my stride and get into a groove. I tried to balance a desire to regain some lost time with the knowledge that I still had 70+ miles to go so I dialed in some episodes of MarathonTalk and got into my groove.  The sun was shining, I had hours of great podcasts and I got moving. I ended up passing about 5 or 6 runners during this section and only took one short stop to apply some 2Toms Blister Shield at an aid station to make sure that my feet stayed in good shape.

My nutrition plan for the race was pretty simple in that I was aiming to take in roughly 250 calories an hour. I was alternating between Clif Blocks, Clif Bars and Lara Bars which seemed to be fine so far. I did however note that I was getting a bored of the sweet flavor and wanted something with a bit more salt. I got to the Clackamas Ranger Aid Station in right around 12 hours meaning that I had run the 2nd marathon of the race as fast or even slightly faster than the first one.

I pulled into Clackamas and was excited to see Sarah. This was a pretty small race so I had run most of the miles so far solo and was looking forward to some fun conversation to pass the miles a bit. I had a relatively short stop at the aid station to get ready for the night including a jacket, gloves, hat and most importantly, my trusty Petzl NAO he

adlamp. Bundled and geared up, I took off running with Sarah. I shared with her that I was a bit down about my performance so far though I also shared that I was looking forward to running with her. She went through a relatively quick checklist and asked me about my nutrition (OK so far but getting bored of the energy bars), my legs (surprisingly good actually) and my head (still functional). We had a roughly 17 mile loop to do around Timothy Lake and we got to work. The miles flew by as we talked about all the crazy races and adventures that we had both done along with our various and ever growing bucket list of races. Sarah had run the Javelina Jundred the year prior and both of us were signed to run it several weeks later so we chatted about gear, pacing and more. I was using some walk breaks and hiking all the hills but Sarah also pushed me to run more which was a great reminder to avoid the temptation to turn the run into a long nature walk. Sarah new the course well but we still somehow managed to get off track a couple times near where the trail intersected some of the camping/parking areas around the lake. It never cost us more than a minute or so and added some adventure!

After what seemed like twenty minutes but was really more like 4:30, we had finished the loop. Both of us took a couple minutes to change our batteries on our headlamps and grab some food before we started the almost 50k trek along the PCT back towards Olallie Lake. We both got a bit cold after the short stop but noted that we quickly heated back up after we got back to hiking/running. We were running anything flat or downhill and making really good time on the uphills through some consistent power hiking. We passed a number of runners on the return trip and were only passed once adding to the confidence and excitement of the night. This section went great with only two negative points. First

was nutrition, I was just absolutely done with bars. I like to rely on the food i’m carrying to minimize aid-station stoppage time but I couldn’t take another bar no matter the flavor. I ended up eating a lot of soup at aid stations along with downing a TON of Coca-Cola. The only other negative was my one and only fall on the run. We were moving well through a section and I caught a toe on something. I’m assuming it was a downed tree but it was probably a tiny pebble. I went flying through the air and did what I believe was a great superman impression :(. We kept moving through the section drawing closer and closer to the finish. One note is that the last 30 miles are net uphill. While there are no Hardrock like climbs, there was a lot of hiking involved. While I wasn’t going to get a sub 24hr time, I thought that I could get a new PR by coming in faster than my 25:21 time from Burning River and do it on a course with almost 50% more climbing. We kept moving and pushing eventually getting through the last aid station meaning that we had roughly 5k to go. After what was likely the longest 5k either of us had ever run, I finished in 25:14 securing a new 100 mile PR.

I ran the 2nd half of the race in 13:04 compared to 12:10 for the first half which I fully attribute to the excellent pacing and company of Sarah! I was the 35th finisher out of 81 runners who started the race.

After changing clothes, I drove Sarah back to her car and thanked her for the absolutely wonderful company. Trail and ultra runners are truly wonderful people and Sarah exemplifies everything that I love about the sport. That she was willing if not excited to give up a night/day and run nearly 50 miles with a near complete stranger was awesome. I’ve already offered several times to repay the favor and can’t wait to pace Sarah in a race in the future!

I headed back towards Portland, managed to check into a hotel room and proceeded to sleep for about 15 hours! I was traveling the next day but still had a couple hours to kill and managed a visit to both Multnomah Falls in the Columbia River Gorge along with Voodoo Doughnuts for a bit of post-race refueling. 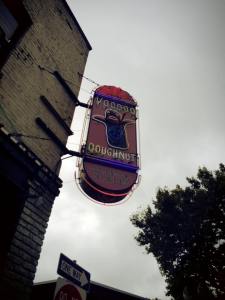 I can’t say enough positive things about this race. The group at GoBeyond racing puts on a great race and the scenery and trails that runners experience is breathtaking. If you like running long, go visit the PNW and check out the Mountain Lakes 100!