This last weekend, I participated in the Coldwater Rumble which takes place at the Estrella Mountain Regional Park in Goodyear, AZ. The race is organized by Aravaipa running, the same group that puts on Javelina Jundred and Black Canyon 100k amongst many other desert/trail races. Last year, I had run the Coldwater 52mi race as a lead-up to the Zion 100. This year, I had come back to run the 100mi race. While it wasn’t an ‘A’ race, it was an opportunity to gauge my early season fitness plus a great opportunity to run in the desert/sand in shorts and a tshirt.

In addition, Aravaipa had offered an added bonus via the Sonoran Desert 200 offering finishers a nice beer growler for having finished both the Javelina Jundred and the Coldwater Rumble 100mi races back to back.

I traveled to the Phoenix area with my friend Elizabeth who was due to run the 52k race. We arrived in town a bit early so that I could hang out with my brother Zach and enjoy a couple days of nice weather. En route to the race area on Friday, we picked Brandt – a running friend from Chicago who has since moved to Denver. While Phoenix was alive in pre probowl/superbowl hype, the three trail runners packed in a car and headed west of the city for a bit of trail adventure.

We arrived at the Estrella Mountain park in the early afternoon on Friday and proceeded to tour a bit of the course. I had run the race the prior year but the course had been changed so it was a nice opportunity to show Brandt and Elizabeth some of the trails that we would be running. The course is a 20 mile loop run washing machine style meaning that you would alternate directions on the course on each lap. The first loop would be run clockwise (starting with red/finishing with blue) and we would alternate from there. It was great to see the course again however if I’m honest, the course preview also put me in a bit of a funk. The first 1/4 to 1/2 mile leaving the start area in each direction hit a trailhead which yielded a nice sharp climb to gain access to the trails. Our preview hike didn’t include any of the flatter runnable stuff but rather focussed on lots of hills the day before the 100 miler.

The course itself is an interesting challenge. It certainly isn’t the steepest course with approximately 1,600ft of gain per 20mi loop but what it lacks in elevation change, it offers in rugged trails. While there were a couple sections that you could dig in and run, the majority of the course had winding turns, steep desert washes that you would go in and out of and an especially pleasant ~3mile section of soft sand per loop.

So how did the race go? Well, here is an abbreviated version:

Lap 3 – Got cooled off, started running again, had a great time.

Lap 5 – Had a solid loop. Solid walk/run mix and didn’t get lost. Met up with Elizabeth who finished the last two miles with me.

Lap 1 – The course change kicked us all right in the teeth this year. Even on fresh legs, the new entry to the trail on the east end of the loop started things off a bit tough. I got into a nice groove and focussed on early race pacing, hydration and fueling. I knew my approximate splits from the first 20 miles last year and made sure not to run faster since I was due to run twice as far this year. Each of the loops had been run counter-clockwise last year so it was nice to see the course from a different direction. It also meant that we would be running through the ~3 mi sandpit going slightly downhill making those miles a bit easier to pass.

Lap 2 – As expected, this was my toughest part of the race. While the temperatures were not as bad as the year prior, the aid station volunteers reported that the highs would hit 78 or 80 with zero shade on course. I was spending more time at aid stations getting water and trying to keep cold. Leaving the Pedersen aid station on loop 2, I knew that I had nearly 8 miles to go to get back to the Coldwater Aid Station and was overheating. Even dialing back the running, I was getting hot, running low on water and my stomach was in knots. I ended up puking all over some cacti and had some pretty down moments. As bad as that was, it seemed to reset my system a bit. I marched into the Coldwater aid station, refilled my bottles while also chugging a 1/2 litre of Coke and was moving again. I ran most of the 3.5 miles back to the start / finish and hoped that the worst of the race was behind me. 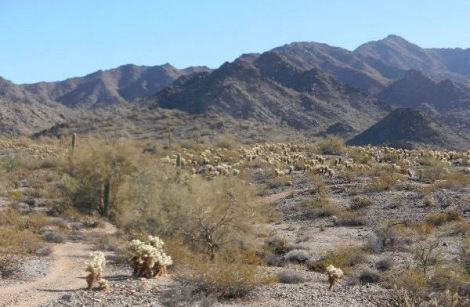 Lap 3 – I took an extra couple minutes after loop 2 to get ready for the night. I added a headlamp, spare battery and also put some layers into my pack. The temperature was still in the upper 70s but I knew from experience that the temps would drop quickly as soon as the sun set. With the worst of the heat behind me, I got back on the trails. There were a number of runners in the 52k and 52mi race who were finishing around this time and it was great to see the look on their faces as they finished their journeys. I had seen the course from both directions and settled into a nice groove on this lap. Towards the Pedersen aid station, the sun set and the night running started. Between the darkness and the majority of the runners in the shorter races having finished their races, the trail had a very different feel at night. It was much more desolate out on the trails though nearly every other runner/pacer that I passed offered encouragement. My legs were still working and I was still able to run though I was a bit more selective about where I ran as my agility wasn’t what it was 50-60 miles earlier in the day. I finished the loop and saw that it was within twenty minutes (actually 4) of my first loop which was a real positive note. Perhaps I had gone out too slow or perhaps I had paced the race well and would be able to run a bit in the last 40 miles!

Lap 4 – What a great time! I had previously run the Black Canyon 100k in 2014 and met a local runner named Chad on the course. Chad who was also running in the 52k race had stayed in contact via social networks ever since BC100k. In a thread, I had mentioned that I was running the race solo (without a pacer) and he mentioned that he might have a friend who was looking to pace for a 20 mile loop. Chad connected me with SheriAnne Nelson, a local elite triathlete and fitness coach. It turns out that SheriAnne was no average athlete, she has placed and won several very competitive races. She was a speedster and I had no idea why she would want to pace a mid-pack runner like me! I was a bit worried as I know what my pace (or lack thereof) can be like 100k into a race but SheriAnne assured me that she was looking for a fun training run and had no concerns about speed. In chatting on-line before the race, I also learned that SheriAnne was planning to run Zion 100 as her first 100 miler so we had lots to discuss.

After changing out my battery and grabbing some water and fuel for the next 20 miles, I connected with SheriAnne and we were off for our night run. The conversation was terrific going from nutrition to race plans to kids (we both have three) and everything in between and the miles passed quickly. SheriAnne is an incredible athlete and is putting together a team to compete in the Patagonia Expedition Race. This is no easy undertaking – it combines rugged sport and route finding in very harsh conditions. The entire trip from planning to execution seems like an amazing undertaking and I had tons of questions.

I guess that the conversation was so interesting that we screwed up and somehow missed a turn or doubled a back. Between a pretty lucid runner with 80 miles done and a completely lucid pacer with nearly 20 miles done, we messed up and turned the 20 mile loop into a 24 or 25 mile loop. OOPS. I was a bit bummed about the extra miles/time but it didn’t matter much. Between a compass on SheriAnne’s phone and some consultation with another runner in the race, we righted the ship and headed in the right direction.

It was my slowest loop of the race but one of the best. That an athlete of SheriAnne’s caliber was willing to give of her time/energy to help someone else running in a race is one of the things that I love about this sport. While I’m not sure that I could keep up with her in a race, I plan to repay the favor in the future and crew/cheer/whatever it takes!

Lap 5 – It was time to finish the race off. I was tired and sore but not broken. I knew that there would be a good mix of hiking but I managed to run a lot of the sections. The temperatures dropped to near 40 and while warm compared to the winter in Chicago, it felt pretty cold. I had probably gotten a bit too much sun exposure during the day and was tired so I bundled up with a lightweight beanie and gloves and kept trucking. I got through the Pedersen aid station in about 2.5 hours and was looking forward to meeting up with my friend Elizabeth who was planning to hike back on the course from the finish to see me in.

I knew that a sub 24hr finish wasn’t going to happen. Between a tough course, some bonus miles and early season fitness, I just didn’t have it on the day so I enjoyed the final loop. Around 7:15am, the sun rose above the mountains with a beautiful yellow/pink sky. To make it even better, I noticed that I had a good ‘LTE’ connection and decided to facetime my wife and kids so they could see it. I was 97 miles into the run and super tired but showing them the sunrise and the course was pretty special. I hiked a bit more and ran into Elizabeth who had hiked back on the course to meet me. This was a nice reversal as I had seen Elizabeth finish her awesome run at Tunnel Hill a couple months prior.

At 8:31am – 25 hours and 31 minutes into the race, I crossed the finish line. There must have been a lot of carnage and DNFs during the race as I was 8th guy / 9th overall. There is nothing easy about running 100 miles but this one was fun and I’m looking forward to returning to Phoenix to take another run at Javelina later this year.

With my friend Brandt who had won the race and finished about six hours before me! 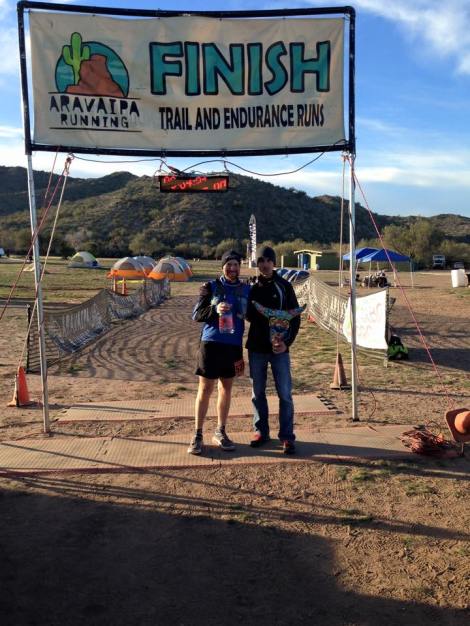 Some new hardware and a hard earned beer growler. 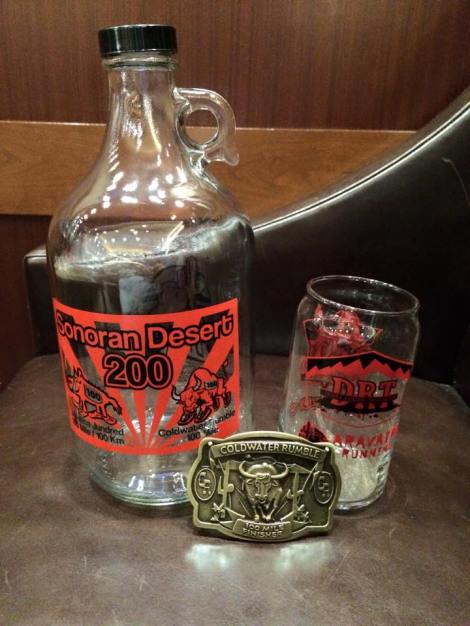