This race report took me a while to write – probably because I had so many mixed feelings about the race or specifically my performance in it. Bighorn 100 was set to be my 2nd 100 miler in 2014. I had finished the Zion 100 in April and was excited to toe the line in Dayton Wyoming on the Bighorn course.

I had run the 50 miler at Bighorn in 2013 so I knew what to expect and thought that my training leading up to the race would allow me to finish within the cutoffs. This was a tough race with technical terrain, lots of altitude and the potential for weather so my only goal was a finish before the cutoffs.

We had a great family vacation before the race visiting the Black Hills in South Dakota before making our way into Sheridan for packet pickup before the race. 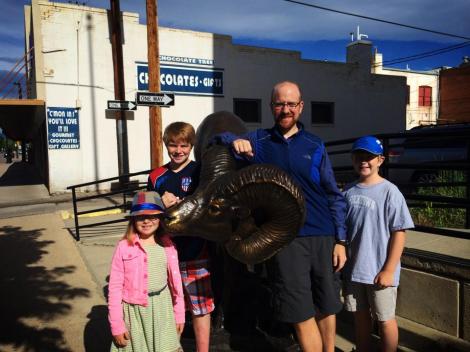 Bighorn 100 is a rugged trail race starting near and finishing in Dayton Wyoming. The course is an out & back style layout starting a couple miles from Dayton and running up to the Jaws trailhead before returning back to Dayton. There is a five mile stretch of gravel road from the finish in Dayton to the trailhead so the race starts several miles up the gravel road to maximize the amount of time spent on the trails. The course includes 76 miles of single track trail, 16 miles of rugged double track jeep trail, and 8 miles of gravel road.

The course has approximately 17,500 feet of climbing and similar descent so there was relatively little flat running to be found.

The race starts at 11a meaning that all runners would be facing the night on this course. The 11a start also meant that my normal pre-race routine was way off. We stayed the night before in Sheridan, WY which is about 30 minutes away from Dayton. After waking around 6am, I ate a larger breakfast than I normally would since I would have another five hours until the race started.

We had rented a large 4×4 truck for the weekend as a couple of the crew access points were only accessible via four-wheel drive vehicles with lots of ground clearance. We loaded up the truck with all the possible supplies we would need and drove towards Dayton. There is a brief runner/crew briefing near the finish line in Dayton at 9am. I caught up with some friends and tried to keep my nerves from getting the best of me.

After the briefing, we loaded back in the truck and drove towards the race start.

After some nervous moments and hugs, it was time to start. The course starts in the canyons around 4,000 feet and nearly immediately climbs over 3,500 feet in the first seven miles. The first couple miles were somewhat flat and then we hit the uphill which was steep and unrelenting. 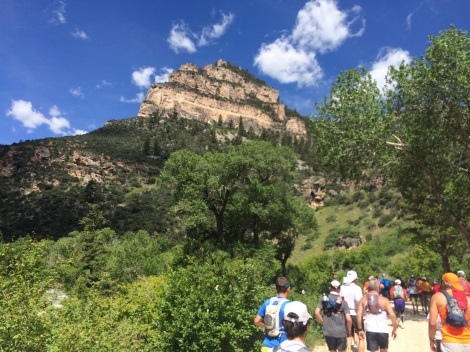 This was power hiking and I did my best to settle into a rhythm. It was way too early to push hard so I kept on trucking knowing that the climb had to end at some point. Around mile eight, it started to top out and I paused to get this picture looking back at the climb. The picture above had been taken some four miles and nearly 4,000 ft below – essentially in the far left center of the picture below.

After about 3:30, I made it to the first crew accessible aid station at Dry Fork at around mile 13. That’s right, 3:30 for my half marathon. I was still feeling good though I was slightly behind my best-pace goals for the section. I refueled, hugged the family and set out on the trails. The next 20 miles started with several miles of fire roads before dropping us back onto some beautiful singletrack. I found a groove and made progress though it was slow going. Around mile 28, we started a steep descent that would drop nearly 3,000 ft in three miles and get us to the Footbridge aid station.

I made it into Footbridge at around 8:00pm having taken nearly 9 hours to cover the first 50k. The couple miles dropping down to Footbridge were steep and technical. This was no enjoyable downhill – this was technical hiking. I made it into Footbridge and immediately spotted my family with all my gear at the ready. I’ve run 50k and felt fresh doing it. This 50k was different and I was a bit worked but excited that I was still on the move.

It was nearly sunset so I geared up for the night. The next 18 miles were all uphill going from 4,000 ft to over 9,000 ft leading to the course turnaround at Jaws. At the briefing, we were told that targeting six hours for the climb to Jaws was a good/reasonable target meaning that if I could average 20 min miles hiking uphill including a couple stops at aid stations, I would be on schedule.

I started hiking and fell in with a nice group making good progress. We passed the time telling stories about races, training and more. Towards 10pm, we saw a large object in the trail ahead. It was a huge moose! There was no way that we were going to tangle with this moose so we waited, made a bit of noise and hoped it would move on. It did after a couple minutes.

This is really the point at which my race went to hell.

The weather turned and turned quick. It was already cold but that was expected and I had plenty of layers but it started to storm. This was a full on storm including rain, wind, lightning and eventually a bit of hail. My pace was slow given the technical climbs and altitude but the trails quickly turned to mud. I had brought hiking poles with me and got them out to help with stability. I had been consistently hiking around 20-22 min miles but that changed quickly. Suddenly, I was slipping and sliding in the mud, falling and making no progress. I was working hard just to hit 35-40 min miles. I focussed on moving and not getting negative but I felt like the race was getting away from me.

I got into the car with my family, turned the heat up and got under about three layers of blankets.

It was my worst race performance and humbling.

I did manage to drag my butt out of bed the following day to head back to Dayton. My friend Jason finished the 100 miler and my friends Cathlin and Kirsten both finished the 50 miler. It was great to see them finish!

I’m already planning a redemption run at Burning River but more importantly, plan to return to Wyoming to get a finish at Bighorn in 2015.