As part of my training for the Zion 100 Mile trail run, I wanted to get as much experience as possible running long distances. When I found the Black Canyon 100k, it looked like another perfect opportunity for a long training run on somewhat similar conditions to the Zion 100 course.

While 2014 was the inaugural running of the Black Canyon 100k, it was put on by Aravaipa Running who has an excellent track record of putting on ultra-distance races in the Phoenix area so I was confident that first-year challenges would be minimal or non existent.

The course was exciting in that the 100k (62 miles) was point to point starting well north of Phoenix in Mayer, AZ and working down the Black Canyon trail to a finish on the north side of Phoenix. The point:point meant some additional logistics that were addressed via a shuttle to get runners to the start from a parking/staging facility near the finish.

While the course was net downhill, it offered a good deal of both climbing and descent with 9,000 ft of gain and nearly 12,000 ft of descent almost entirely on single and double-track trail.

I traveled out to the race with my family who were looking forward to a brief respite from the Chicago winter along with my friend Cathlin who would be pacing me at the Zion 100 in a couple months. This was both of our first attempt at 100k so our primary goal was to manage a finish within the 16hr cutoff. [Sidenote: the 2015 cutoff has been extended to 18hrs]

After a super early wakeup, we were on the road at 4:30 to make it up to the parking area by 5:30 to catch the shuttle to the start. The drive and shuttle was uneventful and I even managed an extra 15 or 20 minutes of bonus sleep during the drive north to the start. The start was well organized with coffee and snacks for the runners along with staging areas for the drop-bags.

The start is located at Mayer High School so after some brief announcements, we were sent around a lap of their quarter-mile track before hitting the roads toward the Black Canyon trail. It was fun to see some of the front runners darting around the high-school track at what was clearly a comfortable pace for them and speed work for everyone else.

After a couple miles on the road, we made it to the trailhead and started our now ~60 mile journey south towards Phoenix. The altitude at the start was several thousand feet higher than Phoenix and the temperatures were still very cool so I made the silly decision to start in a lightweight running jacket. Within 15 minutes of the race start, the sun had risen and the temps climbed from the upper 40s up QUICKLY. The race had been scheduled in February because the temperatures are seasonably cool but Phoenix had been going through a warm spell and the forecast called for temperatures in the higher 80s potentially even touching the lower 90s. With all of my recent training having been in Chicago, the temperatures were going to be a challenge – potentially more so than the distance.

The trail was absolutely beautiful with rolling hills and pretty vistas of the desert in every direction. What the trail offered in views it lacked in shade – there wasn’t any. Perhaps you could stand next to a cactus but that would just be silly. We settled in with a nice group and found a nice pace that allowed us to cover ground without over-heating significantly. 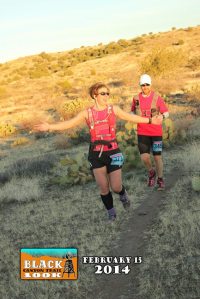 We passed through our first marathon in about 5:20 averaging a 12:30ish pace including a couple stops at aid stations. The first section of the course offered the most net descent meaning that the remainder of the course would have nearly as much up as it down. 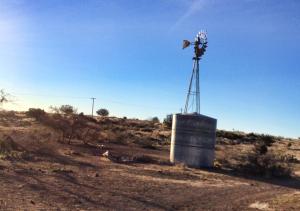 We also passed the windmill/water tower that featured on buckle awarded to race finishers. At this point, I was baking in the sun. I was dunking my arm sleeves and hat in water/ice at every aid station, taking salt and hydrating but the now 80+ degree temps were a bit much for my winter-acclimated state. I still managed a smile and to keep spirits up as we worked along the trail.

We passed through our first 50k in 6:37 and were approximately five miles away from the Black Canyon City aid station where I would see Kelly and the kids for the first time. I came into the aid station out of water and a bit beat up but very excited to see the family and refuel. Kelly had stocked a cooler full of all kinds of goodies including ice-cold Coca Cola, popsicles, nutella wraps and more. I was perhaps a bit eager for some ice cold calories and proceeded to chug an entire bottle of Coke before inhaling a couple popsicles. As great as it all tasted going down, I soon found myself light-headed and nearly fell to the ground but luckily latched on to a nearby car in the trailhead parking lot.

Kelly saw me and immediately rushed over to offer me some support. I had gone from an absolute high to near blackout conditions in seconds. Another runner soon came to my aid as well and I was walked/carried over to the aid station where paramedics  were tending to other runners. I was already starting to recover but was ordered to sit in a chair and given a cold towel and some water to help lower my core temperature. My condition seemed to recover almost as quickly as it had deteriorated but both Kelly and the paramedic weren’t convinced. I knew that I had one shot to get back into the race so I focussed on gathering my composure and convincing both of them that I was OK to undertake the roughly marathon distance remaining to finish the race.

After all the fluids, I had to use the washroom. There was a real (ie not a porta-potty) facility since this was a major trailhead so I asked if it was OK to head towards the bathroom. I was given the OK but I knew that several sets of eyes would be on me as I got out of the chair and walked towards the bathroom. I can only assume that this is the equivalent of being asked to walk a straight line by a police officer who suspects that you may be under the influence (no experience with that) so I did my absolute best to stand up strong and walk in a straight line towards the bathroom. After a quick visit, I was feeling even better and managed a slow jog back towards the aid station area. After another conversation with Kelly and the paramedic, I was given approval to move on.

Cathlin was more than patient and waited around while I sorted my issues out. I had wasted more than 30 minutes at the aid station and I was immediately worried about what that would mean considering the still climbing temperatures and strict cutoff times. The next couple miles after leaving the aid station offered a significant climb so I attempted to get some calories down and get my head and body back in the race.

Though my energy levels were still low, we soldiered on and managed a run/walk combination. The sun finally started to set and the temperatures as well providing us a more comfortable running environment. We kept moving passing through the 50 mile mark in approximately 12:04.

With my energy levels finally returning to normal, Cathlin took a turn for the worse with some significant blistering on her feet. Running became problematic so we settled in to a fast hike doing our best to keep moving while keeping an eye on the time as we were close to the cutoffs.

Finally, with approximately two miles to go and some time to spare, we sensed that we were close and decided to run it in. While not exactly pretty, we finished in 15:34 tied for 32nd place out of 65 starters / 42 finishers. The heat of the day had taken its toll on everyone and we were both thrilled with a finish.

Between nearly 30 minutes of stoppage time for my heat issues and Cathlin’s blisters, we gave up a ton of time and could/should have finished earlier but the challenges we faced made for a finish that was fought for and earned. I would like to come back and revisit this course again – it’s a beautiful and challenging course and one that I have a bit of unfinished business with. 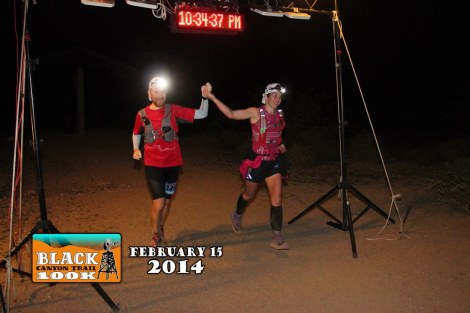