This past weekend, I ran in the Antelope Canyon 50mi race. The race has distances ranging from 20k to 100mi but I selected the 50mi distance since I had foolishly schedule another 100mi race two weeks following.

Antelope Canyon is part of a growing list of races put on by Ultra Adventures in the Utah/Arizona Grand Circle area. This was the first race of 2015 followed by Monument Valley, Zion, Grand Canyon, Bryce Canyon, Capitol Reef and Tushars. All beautiful locations offering unique courses and challenges.

I was excited to be selected as an ambassador for the group this year and head out to the race to check out some new trails. The Ultra Adventures ambassadors had been very active on Facebook and I was excited to meet some of the team members in person. The winter in Chicago has been brutal (like normal) so outside of a couple of races, all of my training has been done inside on either a 1/4 mile indoor track or treadmill. It’s fine for stacking up some miles but doesn’t come close to simulating the technical terrain of single track trail running.

I flew out to Las Vegas with my friend Elizabeth on Friday and proceeded to drive a little over four hours to Page, Arizona where the race would be held. It made for a long travel day and lots of sitting so both of us were a bit anxious to stretch out a bit once we arrived at packet pickup.

Packet pickup was held at a natural amphitheater on the outskirts of Page and runners were streaming in to get their bibs and gear ready. Matt Gunn who runs Ultra Adventures is well-known for the eco-friendly nature in which he puts on races which was on full display at the packet pickup. All of the garbage containers had multiple receptacles for the various forms of litters and his zero-waste eco-commodes were available for use. As someone who loves the outdoors, it is absolutely refreshing to see Matt and his commitment to having as close to zero impact on the environment. 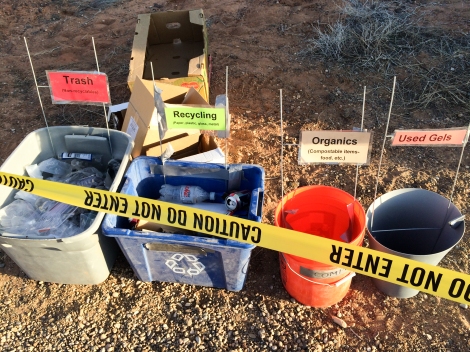 Also on display were the handmade awards including awesome bracelets that would be given to the 50 mile participants made by local Navajo artisans.

The race started at 6a so after a decent sleep and a 5a wake-up, I made it to the start with 15 minutes to spare fresh and ready for a fun day of running. The 6a start included both the 50mi and 100mi runners to at least 300 runners would be headed out together. The 50/100mi races have the same course through 50 miles so the two groups would be running and working together through the day. The course is somewhat interesting in that it’s essentially two races in one. The first 40 miles take the runners through various slot canyons and trails along the Colorado river. After 40 miles, the runners are brought to a 10 mile loop around the city of Page – the 50 milers run the loop once before finishing and the 100 milers run it six times before claiming their buckles. From a glass half full perspective, it offered a unique course for 40 miles followed by an easy to crew/manage/pace loop for the 100 milers.

While the course was relatively flat for a 50 miler with approximately 4,500 ft of climbing, we were warned to expect a long day given that the course had a lot of sand running. No truer words have ever been spoken.

With hundreds of headlamps bobbing up and down, we started off at 6a sharp. After what seemed like maybe 1/16 of a mile of running, we were dumped onto some technical slickrock. Some early conga lines formed but it certainly helped to moderate the early pace. After a bit of climbing, we were tossed onto a sandy double track section which we ran for about four miles. The course was soft but you couldn’t really see how soft it was in the darkness. After about four miles, we took a sharp nearly 180* turn and were at the mouth of our first slot canyon. The sun was just starting to rise and the desert had that classic pinkish glow to it.

After passing through and up the first slot canyon, we had another 1/2 mile to go before reaching the first aid station at ‘Antelope Aid Station’. From Antelope, we had three miles of desert running to get to the Upper Antelope Canyon. Upper Antelope was gorgeous with 100-200 ft high canyon walls spaced no more than 5-10 ft apart.

After running through Upper Antelope, we were tossed out onto another sandy section where we had to scale a sand dune before returning through another smaller canyon. This canyon had several sharp descents requiring a couple of ladders and even more scrambling. While the front-runners were likely racing, the majority of the runners took their time to photograph/video the canyons. There were at least 40 more miles remaining and plenty of time to make up for a couple of minutes of photography. Leaving the second slot canyon, we had approximately three more miles to return to the Antelope Aid station which was nearly 12 miles into the race.

Like most of the runners, I had started in a jacket but it was warming and I took the opportunity to stash my jacket in my pack along with my headlamp. While I could have dropped both my headlamp and jacket in a dropbag, I wasn’t certain how hard the course would be and decided to keep both with me in case I had a long/slow day and was out on the course after dark. It turned out that I wouldn’t need either of them as I finished with about 20 minutes of light to spare but it was still comforting to know that I had the extra layer and light just in case I did slow.

Leaving Antelope, we would have six miles of sandy double track to run before getting to the Slickrock aid station. I met a bunch of runners along the way and we chatted about our various race experience/plans while also swearing about relentless amount of sand that we were running on. The temperatures were comfortable and everyone was happy – but it was just difficult to run at pace without a lot of additional effort given the soft sand underfoot. Everyone settled into ‘ultra’ mode and ran / shuffled/walked/hiked until we rolled into Slickrock Aid at mile 17.5. The next aid station was only three miles away so we stopped mainly to empty the sand from our shoes before continuing on.

Coming into Horseshoe Bend Aid, I knew that we had approximately eight miles on the most technical terrain of the course so I made sure to fill both bottles and empty both shoes before pressing on. We ran approximately a half mile past the aid station before arriving at the edge of a cliff at the Horseshoe Bend of the Colorado River. To say that the views were stunning would be a complete and total understatement.

The next seven miles were as difficult as they were amazing. We were running/scrambling on technical slickrock along the wall of the Colorado river. I’m sure that the front-runners were hauling ass but I had no desire or intent to push the pace. I took lots of pictures and soaked it all in.

Eventually, we started to move away from the canyon wall. I fell in with a couple strong runners doing the 100 mile race. Jamie and Andrea were moving well and we chatted about the race so far along with their plans for the loop/night section. We all commented about how difficult the course had been and hoped for just a few ‘runable’ miles. We made it to Waterholes Aid station and were relieved to refuel a bit before moving on. My GPS (Garmin 910xt) is generally super accurate but had lost satellite coverage numerous times during the slot canyons. I was pleased when the aid station volunteers reported that we were actually at mile 28.5 rather than the 27.2 I was showing. Leaving the aid station, we were told that we had a steep descent into another slot canyon followed by a sandy climb to the high point of the course. That guidance proved to be spot on. Crossing the road, Jamie and I found a 200ft DROP that we had to scramble down. I’m an adventurous guy and enjoy climbing but I had more than a marathon on my legs and this was some pretty technical stuff. There was some jumping. There was some dropping. There was some butt sliding. Eventually, we made it to the bottom and the mouth of a very cool slot canyon. 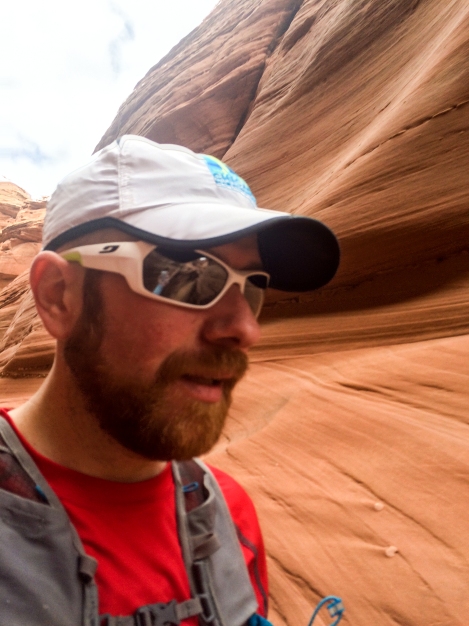 The best was yet to come though. First, there were ladders:

And then plain old climbing. Of all the gear that I had from earlier in the race including my jacket and headlamp, the items I was happiest to have were my gloves! While it was nowhere near cold, they really helped to get some grip and avoid removing a couple of layers of skin in the process. We climbed and climbed and then hiked up some sand before topping out on the course.

At this point, we had finished all the really ‘technical’ sections of the course. We had a little under a half marathon of mostly sand running and then would get to the Page Rim trail. The Paige Rim trail is supposed to be runnable single track and all of us were looking forward to picking up the pace a bit. That said, I was incredibly impressed with the runners attempting the 100 on this course. The first 50 miles of this course felt more like 100k+ effort than 50 miles – this was no ‘easy’ warmup!

The course and sand seemed to get softer and deeper but we plugged along and the miles clicked by.

Approaching the Page Rim trail, both Andrea and Jamie dropped back a bit. They had 60 more miles to cover and it made sense for them to measure their pace. This was my ‘victory’ lap so I got down to business hoping to cover the remaining 10.5 miles in a couple of hours and avoid breaking out the headlamp and jacket that would be required if I was out on the course past 6:30p.

The Page Rim was a really nice runable track circumnavigating the city. The views were great and it was nice to have some decent footing that was more runable than the sand pits from the first 40 miles. 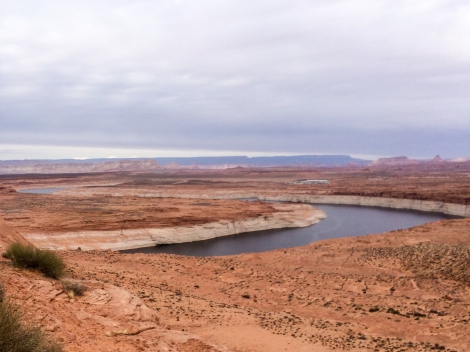 Nearing mile 50, I checked in at the Page Rim aid station again before heading down the .7 mile descent into the finish. It was however only fitting that there was at least a half mile so super deep and sluggish sand before heading into the amphitheater for the finish! I finished in 12:15 – good enough for 56th place out of 158 starters.

My friend Elizabeth was still on course so it was time to put on some warm clothes, eat, drink beer by the fire and cheer in the other finishers!

This was another terrific adventure and one I would highly recommend. It is by no means a fast course – especially for runners not accustomed to running on sand but it is absolutely gorgeous and worth experiencing. I’m not sure that I can fathom running the 100 mile race on the course – certainly not because I don’t like 100 milers. Simply because it would be difficult to get into the loop-running head space for me after the adventurous 40 mile that we started with.

As a side note, the 100 milers had some tough luck. While we had perfect weather with a 40* start and highs in the upper 50s, the 100 milers got nailed overnight. A steady rain started around 3a which turned into a decent snowfall around 7a.